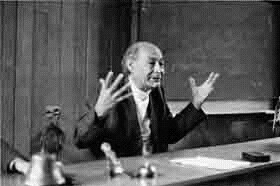 Paul Tournier was a general practitioner in Geneva and also an active Christian. In 1940, he published his first book "La Médecine de la Personne", later translated into English: "The Healing of Persons".
He changed his medical pratice by taking most of his time for listening and talking to his patients, not only considering the physical dimension of their being but also the psychological and spiritual dimensions.
In 1947, he founded the International Group of Medecine of the Person.
This group is still very active today in many countries such as France, Germany, UK and USA.
He then wrote and published many books, which were widely received throughout the world and were translated into more than 30 languages.
He also gave talks and seminars worldwide.

Today we experience a lot of economical pressures for efficiency and cost effectiveness in many areas of human life, which among other influences often endangers and questions the value and the respect for the dignity of human life. All the more Dr Paul Tournier's message is becoming more relevant and more important in our time.

Impact of Paul Tournier and Medecine of the Whole Person